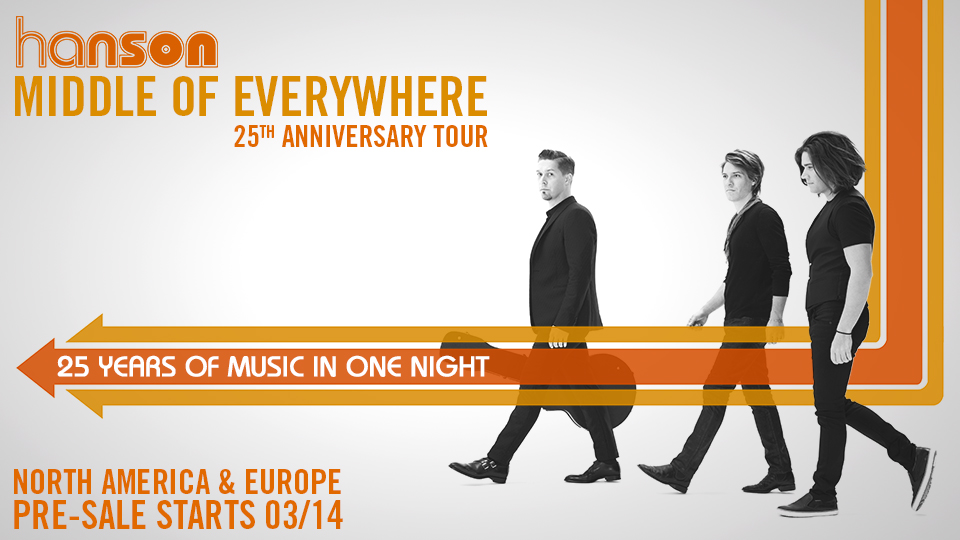 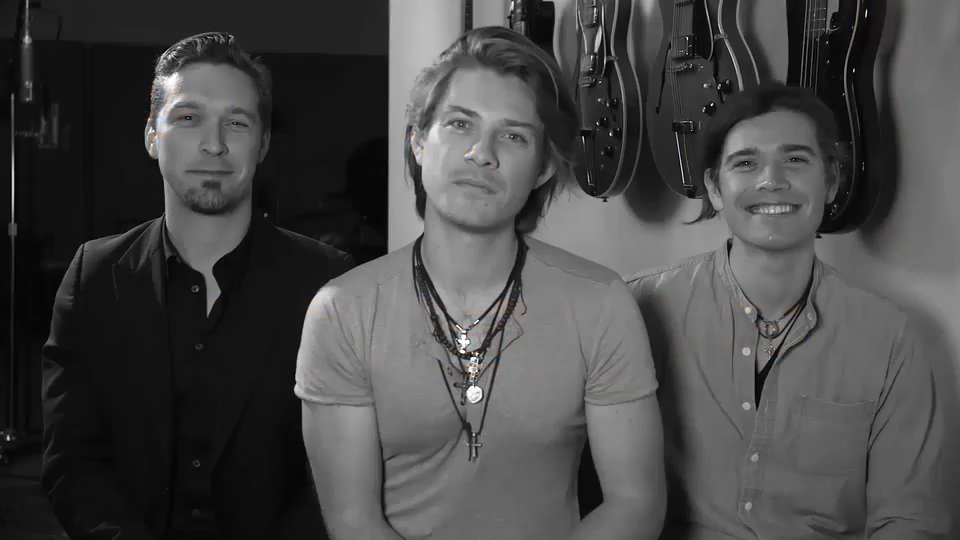 March 13th 2017 - In celebration of the band’s 25th Anniversary, multi-Grammy nominated pop-rock trio HANSON officially announces their extensive Middle Of Everywhere 25th Anniversary World Tour, including Europe and North America on sale today, with further legs in Australia and South America to be announced. The band will kick off the extensive world tour with a headlining set at their own rapidly growing festival The Hop Jam Beer and Music Festival, May 21st in Tulsa, OK.

“Making music together for 25 years is a milestone that we had to acknowledge, and what better way to do it than with an anniversary tour,” said keyboardist Taylor Hanson. Added guitarist Isaac Hanson, “This year is not only about the two decades of music, it’s about celebrating the incredible community of fans who have been with us, singing along year after year”.

Besides HANSON’s 25th anniversary, 2017 is also the 20th anniversary of their debut release Middle Of Nowhere, led by the iconic single “Mmmbop”, which introduced the group to the world. The tour will feature performances of the group’s most widely known material alongside fan favorites encompassing their extensive catalog. In select markets, Taylor Hanson will DJ the “Dance Like You Don’t Care” after party, which will feature an eclectic mix of modern and 90’s favorites.

Coinciding with their benchmark 25th year together, over which the group has released six studio albums and sold over 16 million albums, later this year HANSON will also be releasing Middle Of Everywhere - The Greatest Hits, a comprehensive collection which includes hit singles “Mmmbop”, “Where’s The Love”, “Weird ”, “This Time Around”, “If Only”, “Penny And Me”, “Thinking ‘Bout Somethin’”, “Get The Girl Back”, plus their brand new single “I Was Born”.

Founded in 1992, the trio of brothers began performing classic rock ‘n roll and soul music, and writing original material, crafting a unique blend of harmonies and organic soulful pop-rock. The group took the world by storm with their debut major release in 1997, ushering in a string of top 40 singles and establishing them as one of the world’s leading artists.

In 2003, the group founded their own independent 3CG Records, starting a new era for the band with their #1 independent album Underneath, featuring hit single “Penny And Me”, positioning them among the most successful independent bands to date. Since then, HANSON has released 3 studio albums under their label, toured the world cultivating a vibrant global fanbase engaged by their dynamic live performances, and released an ongoing stream of special products direct to their devout fan community.

In 2013, the group diversified its brand with the founding of their Hanson Brothers Beer Company, and in 2014 added The Hop Jam Beer and Music Festival based in their hometown of Tulsa, OK, which brings together artists and brewers from all over the world, culminating in one of the country’s leading Craft Beer and Music Festivals with 40,000 in attendance, occurring this year on May 21st in Tulsa. The Middle Of Everywhere Tour showcases more than two decades of music in a celebratory world tour, alongside new music that will be followed by a further release in 2018.

Looks like I'll be taking a road trip this fall through the United States again!

:( No Halifax on this tour toronto maybe??

When exactly are tickets on sale?  Newsletter says today, video says the 18th.

Amsterdam and Paris, here I come!?!

I can't believe there's only one uk date. Not everyone lives in London!

So upset theres no Alberta dates considering we didn't get to see the Roots tour... no Edmonton or even Calgary? :( :(

And this tour sounds amazing too. Hanson please do something to change this!!!

Thank you so much for bringing the tour to western, PA!

I can't wait for the Pittsburgh show, greatest hits album, and new Christmas album this year! And for the new studio album in 2018! :D

Woo hoo! Dallas in September. Happy birthday to me!

Thought you would have played more dates in England, gutted I can't go

Now to convince my husband to let me go to Portland and Seattle!!! ❤

@dieteeniescum If you click on the "Calendar", everything sales the Pre-Sale is tomorrow (03/14) and that tickets go on sale to the public 03/18.

People, they can't tour everywhere. I live in the U.S., in a state they never come to, and can't travel for shows. I have come to terms with the fact that I will not see them for a looooong time.

Besides, this is just the first leg of the tour. First leg means they will be adding more dates later.

People, they can't tour everywhere. I live in the U.S., in a state they never come to, and can't travel for shows. I have come to terms with the fact that I will not see them for a looooong time.

Besides, this is just the first leg of the tour. First leg means they will be adding more dates later.

Pitt, Philly, Boston! See ya there!

Pitt, Philly, Boston! See ya there!

Well, no Milwaukee on that schedule, but I'm still holding out hope for Summerfest which falls between the European part of the tour and the start of the US tour.  Come on, they'd have to come to Milwaukee, wouldn't you think?  Of course they would!  <---Talking to myself, again...  ;)

P.P.S. It's Summerfest's 50th Anniversary this year. You HAVE to come!