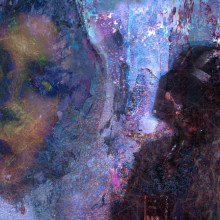 I grew up in Nebraska, my life utterly Hansonless for nearly three decades if you can believe it. Somehow I managed to get a college degree and begin a career in the arts. I moved to Seattle with the dream of managing Nirvana, or something like that, but the day I arrived they found Kurt Cobain's body, so that was the end of that. At 27 I backpacked around Europe for several weeks and returned to the states to learn that a band of blondes called Hanson had somehow taken over the summer. Some months later, I was given the MON CD as a joke, and I couldn't stop listening to it during my night shift at a startup Internet bookstore called Amazon.com. One day I opened the Seattle Weekly (an actual print newspaper!) and found out Hanson was playing the Key Arena that very week for their Albertane tour. Courage comes in many forms, but being a lone 28 year old woman facing an arena full of screaming pre-teens and frazzled parents has to count for something. Thus, my first Hanson concert ended up being recorded for posterity as the "Live from Albertane" CD. I was tapped by a friend who edited the Seattle Stranger (another real live newspaper!) to review the Albertane CD for as my alter-ego, Hanson superfan "Shelly Evans" (four stars!). I joined MOE when the website was barely functional, and discovered my first online fan community called "Adults Like Hanson, Too." ALH2 held an unofficial fan "Hansonfest" in 1999, before Hanson.net or Members Only Events were a thing. While I was in Ohio for Hansonfest, my apartment was broken into and hundreds of dollars of Star Wars memorabilia was stolen. Let's pause to acknowledge that I was a 29 year old woman with hundreds of dollars worth of Star Wars memorabilia. A lot of it was from Episode 1, though, so I wasn't too upset about it. When the TTA tour came to the Pacific Northwest, I brought several co-workers to the Seattle show at the Moore theater, driving up the average age of attendee by a few years and probably doubled the male/female ratio. Two days later, I traveled solo to the Vancouver show and ended up with a surprise Meet-and-Greet and my first photo with the band--my Christmas card for 2000. In the long, dark years between TTA and Underneath, I moved to NYC and re-embarked on a career in the nonprofit arts sector. Due to a quirk in geography, I ended up at the very first Underneath Acoustic show (other than the recording itself), August 9 2003 in Towson MD. Weeks later, I changed a flight to land in Chicago a day early to catch the (sold-out) UA show at Schubas. As I waited in the merciless heat, I was randomly plucked from the line for my second Hanson M&G, followed by free Hanson-decorated cupcakes and a spot in the front row of the teeny-tiny venue which held only a few hundred people. To this day, that remains the best concert experience of my life. I saw the UA tour out as I saw it in, with the final performance at Carnegie Hall NYC. Since then, I've seen most of the tours at least once, attended all five nights of 5-of-5 NYC, got a non-regrettable Hanson tattoo, made a 15-hour pilgrimage to Tulsa for the Halloween MOE (I came as the fanson stuck behind the 'Tall Bald Guy'), got married, moved back to Nebraska, and continue to be identified by my friends as "the one who likes Hanson." As of 2018, I've attended 31 concerts, 12 tours, 9 cities, 7 states, and two countries. So far.