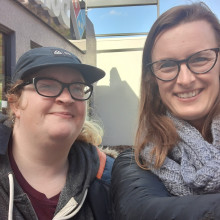 I am 35 years old, and have been a Hanson fan since I was about 12-13. I remember feeling like I had to hide liking them when I was younger, because I would get teased about it. Was AWFUL!! For years I felt SO alone in being a fan, cuz no one else I knew liked them. But in April 2014 when I found out about Hanson's NZ and Australia tour, I joined up with some fan club on Facebook, and 'met' some fellow fans.  Since then have felt heaps less alone.