May 12th Tulsa OK - Pop-rock trio HANSON announce that the release of their craft beer Mmmhops Pale Ale. The brothers’ debut beer from their Hanson Brothers Beer Company was first released in their home state of Oklahoma and select markets in the Midwest in fall 2013.

Mmmhops Pale ale is a smooth-bodied Pale Ale crafted with rich malt and a signature blend of hops, with 7.5% alcohol. The recipe was inspired by the desire to create a high flavor Pale Ale that appeals to both new and established craft beer drinkers.

In conjunction with the release of the beer online, HANSON are also premiering the first online commercial for the brand, featuring the brothers and a group of friends gathering at a local craft bar.

Coinciding with American Craft Beer Week, Hanson Brothers Beer will be celebrating the community of craft brewers in Oklahoma with the inaugural annual event The Hop Jam Beer and Music Festival in Tulsa, Oklahoma, on Sunday May 18th. The festival will feature Oklahoma’s craft brewers, along with live performances by HANSON, Robert Randolph and The Family Band and Butch Walker, for the free all-ages concert in Tulsa’s Brady Arts District.

Keeping with the theme of supporting independent beer and music, The Hop Jam will kick off with a performance by opening band contest winner, Tulsa-based Capitol Cars.

Gates open for The Hop Jam at 3pm for the beer portion of the festival, music will start at 5pm.

For further information about purchasing Mmmhops online and to view the online commercial, go to www.Mmmhops.com. 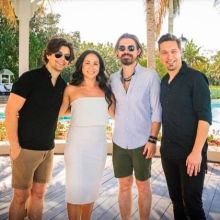 Congratulations, guys! And a great name choice.
Can't wait to get it distributed in Australia!