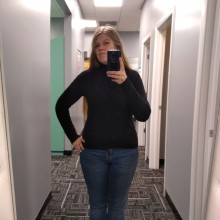 I fell in love with Hanson at 11. My parents constantly had mtv on in the mornings, back when MTV actually played videos. I always thought it was a waste of time, until I saw mmmbop, it opened the doors to the world of music for me. I joined band starting to play the flute and it evolved from there. I was fortunate enough to have a music teacher who owned a sound company she brought in recording classes, production classes and music buisnes and managment I found my nich, I knew what i wanted and what I NEEDED to do in my life. I interned with her for two summers doing live sound and got accepted into one of the top recording schools in the country. I had to attend a community college to knock off some classes and save for the crazy tution along the way I fell in love with a marine and got knocked off course. Sept 2018 I brouht my daughter Jordon ( yes named after taylor) to her first show i watched her fall in love at the same age i did I watch her become obsessed with music she joined chorus and is constatnly writting and singing, It is crazy that the same band that inspired me, is doing the same for my daughter 20+ years later.