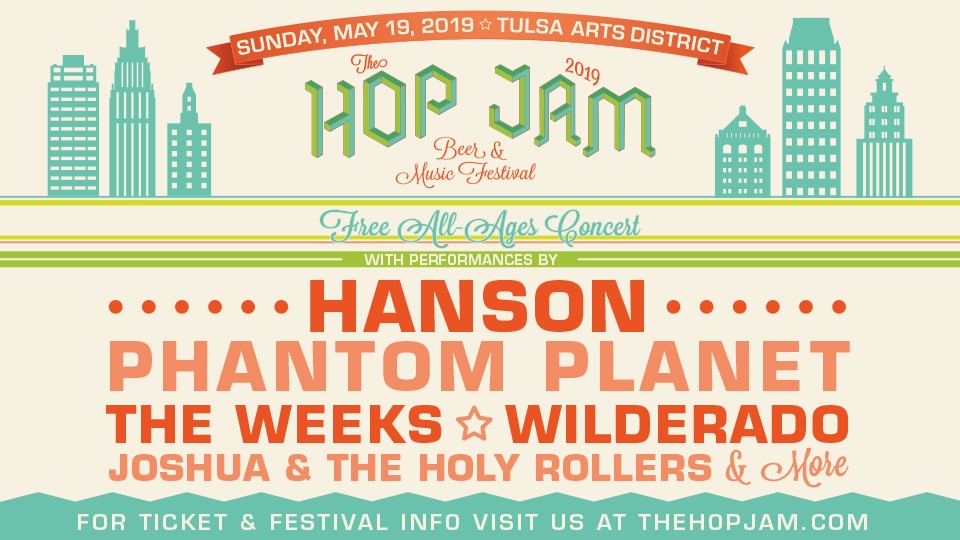 Oklahoma’s largest craft beer and music festival, The Hop Jam is returning this May 19th for it’s 6th year, and announcing it’s full music lineup for the all-ages free concert on two stages, plus the initial breweries from the 100 + breweries anticipated to participate. The 2019 music lineup will be lead by festival founders HANSON, returning to the Hop Jam stage after a world tour, where they performed with orchestras in North America, Europe and Australia including a sold-out appearance with the Tulsa Symphony which will take place on May 17th. Along with HANSON will be a much anticipated reuniting of indie rock powerhouse Phantom Planet. The return of celebrated indie rockers best known for their iconic track “California” follows nearly a decade on hiatus for the band, during which members of the group have found success with various solo endeavors. The Hop Jam 2019 is the band’s first show announced to mark their reassembly.

“It’s exciting to share the stage with our friends Phantom Planet, for their much anticipated return, along with an exciting lineup of high energy rock n roll,” said HANSON member and festival co-founder, Taylor Hanson. Added Isaac Hanson “This may be our favorite music lineup yet”.

Rounding out the main stage lineup is Southern rock outfit The Weeks, Tulsa’s own Wilderado, and Joshua and The Holy Rollers helmed by fourth Hanson brother Mac Hanson. Opening the main stage will continue to be the winner of the longstanding Awesome Music Opening Band Contest, hosted in partnership with Tulsa World, with the top runners up performing on the Park Stage at Guthrie Green. Submissions open March 25th at TulsaWorld.com/AwesomeMusicContest.

The craft beer portion of The Hop Jam is set to impress and excite new and old beer fans once more with an extensive list of new breweries and returning favorites from across OK, the US and more, including American Solera, COOP, Hanson Brothers Beer, Stone Brewing, Destihl, Toppling Goliath and New Belgium, along with many more landmark brands making up the over 100 anticipated participating breweries.

Tickets are available online, with a variety of offerings from beer tasting to VIP options including early entry, access to the Hop Talks panels and a VIP lounge offering food and select craft beers. Also on offer is a Music VIP ticket for the discerning music fan, which features a private viewing platform, indoor amenities, food and select craft beers. Information on special Corporate Tents is available upon request. All ticket options are on sale now at TheHopJam.com

Since it’s founding in 2014 The Hop Jam Festival has brought together world-class music and craft beer to the heart of downtown Tulsa Oklahoma’s Arts District, acting as a catalyst to promote the downtown revitalization and helping to enrich the Tulsa community. The event is organized in partnership with regional restauranteur the McNellies Group and Hanson Brothers Beer. Media partners, Tulsa World and iHeart Media, have helped to support the monumental success of The Hop Jam since it’s inception.

Yassssssssss!!!! I cannot contain how excited I am for Hanson! for Mac! for PHANTOM PLANET!!! What a throw back! Soooo gooooddddddd. Get us to May now!!!

HANSON plus Joshua & The Holy Rollers!!! The brothers’re going to take over the stage!

I knew this was going to happen... stoke level just exploded through the roof. This will be fire. Well done fellas!

nailed it. called this after phantom planet did their secret show and then started posting from the studio.

Please excuse me while I fangirl the hell out over this lineup.

I had a feeling Hanson would be headlining this year! <3 I'm absolutely thrilled to see Phantom Planet back in action, too!  (I've missed them.)  And Mac's band!  So glad we signed up to go --it's gonna be a great time!  :)

This is exciting! What a great year to head to Tulsa!

So so excited for this! We kicked ourselves last time for not staying for this.

Just a question.. Do members attending Hanson Day get into the concert for free? I don't recall buying tickets before but it's been a couple of years since I've gone.

With the exception of the craft beer area (which is a ticketed event), The Hop Jam and all it entails is a free event open to the public.  There is a music VIP package available for purchase on The Hop Jam site if you wish to experience a little more.

When Hanson started The Hop Jam, they promised not to turn it into an event to only benefit themselves.  I'm happy there playing Sunday, but to me its unexpected.

I'm so happy to see Hanson and a few other bands that I've actually heard of playing at Hop Jam this year. Sixth year of going an each year gets better and better.

me too!!!SOOO HAPPY to be going to Tulsa to see Hanson at HopJam2019! Everyone & their brother (Mac) will be there! i would love to see their musically gifted parents do a song with them!

(continued from above)....their parents AND their children... since it is their 27th year as a band, I think they should do the first song of their set all together at HopJam:)

This is so amazing!! Please invited Victory Brewing Company from Downingtown, PA!!!  They are world known and would succeed so well at HopJam!! Cheers!