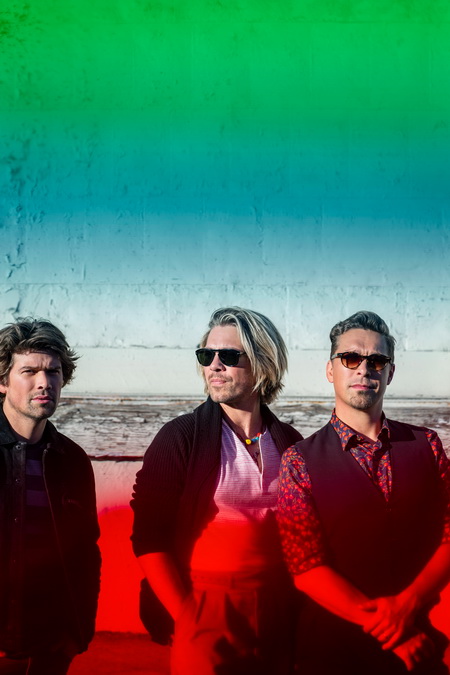 Emerging on the world stage in 1997 with the ubiquitous smash single “MmmBop”, HANSON, the pop-rock band of brothers Isaac, Taylor and Zac Hanson, introduced themselves to the world. Blending their influence of soul and rock n roll with a love of song craftsmanship, the brothers quickly earned stardom and also respect from peers, earning them three Grammy Nominations and millions of albums sold.

HANSON’s focus on the long game was apparent from the start of their career, with their admiration for touring acts like the Grateful Dead who cultivated fanbases outside of the fickle radio world. Today the beloved band is heading into their 30th year performing together (25 since their major debut), and is in the coveted position of having an active global fanbase and independence as owners of their label where they have self-released music since 2003. Knowing their history informs the bold moves they continue to make, and frames the world tour and new album project which marks their return to the world stage in 2022.

The RED GREEN BLUE Tour and Album utilize the inspiration of colors to reflect the unique creative voice of each brother, with a third of the album written and produced by each individual (Taylor’s Red, Isaac’s Green and Zac’s Blue).

“Going into our 30th year as a band we felt like it was imperative we continue to tell our story like only we can, and telling stories in ways that will continue to challenge us to grow and give people new reasons to listen. Red Green Blue is about sharing what has made us a band that has been able to weather so many storms,” said Isaac Hanson.

“Our love and respect for Jim Scott has only grown since we first met 20 years ago. He has been behind some of our favorite albums, so it was an absolute joy to have finally made a project together,” said Taylor Hanson.

Added Zac Hanson, “We have had a long friendship and a deep connection with David since our early days as a band. We could not have had a better musical collaborator for this milestone project.”

Fresh off of the release of Against The World, featuring seven songs released consecutively each month, the prolific band of brothers are reinforcing their deep musicality and credibility as writers, performers and producers with the new project. Leading up to May’s full album release of RED GREEN BLUE, fans will get a taste of the trifecta of sound, with a single featuring each of the brother. Coming February 11 Taylor’s earnest and dynamic “Child At Heart”, March 11 will see the release of Isaac’s organic and heartwarming “Write You A Song” and April 15 will feature the rock infused pop of Zac’s “Don’t Let Me Down”.

Founded in 1992 at ages eleven, nine and six, brothers Isaac, Taylor and Zac spent their first five years building a fanbase as an independent band in Tulsa, OK, performing both classic rock ‘n’ roll and soul music and their own original material, to form their own unique blend of harmony-driven, soulful pop-rock. This unlikely focus was forged by an early introduction to music from the 1950’s and early 60’s, with the young brothers citing influences from Aretha Franklin to Otis Redding, The Beatles, Elvis, Little Richard and Chuck Berry. This formed the bedrock of their musical inspiration, helping to forge their signature sound which incorporated strong melodies and song craft, as well as reverence for their musical forefathers.

After five years and two independent albums, HANSON released their major label debut, Middle Of Nowhere, lead by the ubiquitous hit single “MmmBop,” which was #1 in 27 countries simultaneously, and which garnered them multiple Grammy nominations and five consecutive top 40 singles, including “Where’s The Love,” “I Will Come To You” and “Weird”. Continuing the momentum, HANSON released the critically acclaimed sophomore album This Time Around, followed by five more studio albums, two Christmas albums and five live projects, all accompanied by extensive touring, performing concerts to over 3 million fans and selling more than 16 million albums to date.

The band launched their own independent 3CG Records label in 2003, a story which was chronicled in their acclaimed documentary Strong Enough To Break, a critical step in the band’s ability to maintain their coveted connection with their global fanbase.

The last five years have seen the “Middle Of Everywhere 25th Anniversary World Tour,” alongside a new greatest hits collection of the same name, which included single “I Was Born,” infusing a piece of the future into the year’s reflective projects. The year concluded with a special Christmas album release and tour for the group’s Finally It’s Christmas album, which was among the most successful Christmas releases of 2017, and their most ambitious musical project to date, String Theory, a new album and tour that featured the band recording and performing with a full orchestra. The projects were some of HANSON’s most successful of their career, with sold-out concerts around the globe, highlighting their staying power and still strong connection with fans, more than a quarter century after they began in Tulsa, Oklahoma.

In addition to their musical endeavors, in 2007 HANSON launched their Take The Walk grassroots campaign to provide poverty and HIV/AIDS relief in Africa. In 2013, they launched HANSON Brothers Beer, premiering their new venture with a signature Pale Ale, Mmmhops, and in 2014, they launched the Hop Jam Beer and Music Festival in Tulsa OK, which is among the largest craft beer and music events in the country.

HANSON has never been driven by trends or fame, but instead is fueled by the personal drive to create great art, inspire connection and cultivate community. Those qualities are at the root of the band’s longevity and lasting connection with fans.